The history of fishing from ancient times till now. 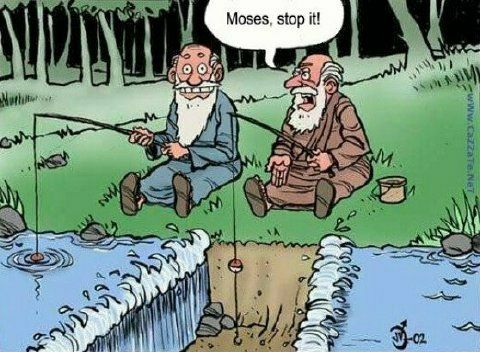 Fishing history is starting from ancient and going to modern, showing the improvement of materials and styles of fishing tackle and fishing gear. Modern fishing gear is not impossible to compare with their progenitors, however the main idea of their individual elements is remained the same. Fishing hooks, line, poles and rods have been changing throughout the decades and becoming the most modern technologies and excellence of quality while suitable for casting lures for all kinds of fish.

Numerous archaeological findings in Southern and Western Europe, South Asia and Africa suggest that the initial fish hunting skills were already at the early Paleolithic culture creators - Neanderthals. Numerous fish bones found in cave dwellings Fore, confirm that the fish was included in the diet of ancient man. However there are no devices for fishing, related to the period were found. Apparently, the Neanderthal relied on the natural intuition and dexterity.

Much later (in the Mesolithic Period, about 10.5 thousand years before. Er.) among the other artifacts (things made by man) appear the implements for fishing gear. Since that time fishing gear (hooks, harpoons, etc.) have not undergone fundamental transformations, but the materials for their manufacture have been changed fundamentally.
In the Neolithic Age (about 3.8 thousand years BC. Er.) value of fisheries has increased. Major settlements arose on the banks of reservoirs. The river at that time were the main transport arteries and the boats were the main transportation. Live near the water and do not fish was impossible. Apparently, the fishing at that time was as important as hunting. Probably hunting for the fish that inhabit ponds, and animals on land started at about the same time. Man hunt for a land animals and larger fish, which are splashed near the shore.
The oldest known painting is an Egyptian angling scene of about 2000 BC shows figures fishing with rod, line and with nets. Greek philosophers Plato, Herodotus and Aristotle mentioned angling in their writings, and another Greek writer, Plutarch, gave tips about fishing lines. Plutarch in his "Comparative biographies" of famous Greeks and Romans captured the event in fishing between Cleopatra and Antony. It is known that the Romans organized the competition for fisheries. Homer in his famous "Iliad" describes angling on bait. In the 2nd and 3rd centuries AD, Roman rhetorician Claudius Aelian wrote about Macedonian trout anglers using artificial flies as lures in the II century. A Chinese account of about the 4th century BC refers to fishing with a silk line, a hook made from a needle, and a bamboo rod, with cooked rice as bait. References to fishing are also found in ancient Greek, Assyrian, Roman, and Jewish writings.
Significant contribution to the development of fishing rods was made by the British. By the middle of the XV century fishing Tackle in England have been brought to such perfection that angling was considered both a science and an art. In 1496 the book A Treatise of Fishing with an Angle gave specific details for the first time in English about the use of the fishing rod. The book describes the construction of hooks and rods for angling. For about 150 years it was the basis of angling knowledge in England.
In 1653, English angler Isaac Walton published The Complete Angler, or the Contemplative Man's Recreation, the most influential book ever published about fishing. In The book Walton describes the art of constructing tackle, the science of basic aquatic biology, and the philosophy of recreational anglers. The first period of great improvement came about the mid-17th century, when Isaac Walton and Charles Cotton were writing the classic The Complete Angler and Col. Robert Venables and Thomas Barker were describing new tackle and methods of fishing.
About this time some unknown angler attached a wire loop or ring at the tip end of the rod, which allowed a running line, useful for both casting and playing a hooked fish. Barker in 1667 mentions a salmon-fishing line of 26 yards. What was obviously needed was a means of taking up and holding such lengths and this led to the invention of the reel.
Back to top

The idea of creating a semblance of modern pole float rods could come in the primitive man's head resting on the shore of the reservoir, which is seen as a hungry fish greedily grabbing incident on the surface of insects. Apparently, it could come an idea to try to catch a fish with edible bait. Prototype of the modern fishing lines could be plant fibers or animal sinews, and as the hook can be used sharp stone or a sharpened twig of a tree that can pierce into the fish mouth.
Judging by stone inscriptions, fishing rods go back to ancient Egypt, China, Greece, Rome and medieval England, where they were called "angles" (hence the term "angling" as a synonym for fishing). These early fishing rods were made of wood, bone or stone. The simplest rods were made out of a tree branch, from split Tonkin bamboo, Calcutta reed, or ash wood, as it was necessary that they be made light, tough, and pliable. The butts were frequently made of maple, with bored bottom; this butt outlasted several tops. Handles and grips were generally of cork, wood, or wrapped cane. Guides were made of simple wire loops or, later, loops with ring-shaped agate inserts for better wear.
For thousands of years, the fishing rod remained short, not more than a few feet in length. The earliest reference to a longer, jointed rod is from Roman times, about the 4th century AD. At that time also, Aelian wrote of Macedonians catching trout on artificial flies and described how each fly was dressed (made). The rod they used was only 6 feet (1.8 meters) long and the line the same length, so that the method used was probably dapping, gently laying the bait on the surface of the water.
Experiments with material for the line led to the use of a gut string (mentioned by the diarist Samuel Pepys in 1667) and of a lute string (noted by Venables in 1676). The use of a landing hook, now called a gaff, for lifting large hooked fish from the water was noted by Barker in 1667.
Improved methods of fishhook making were devised in the 1650s by Charles Kirby, who later invented the Kirby bend, a distinctive shape of hook with offset point that is still in common use worldwide. Kirby and his fellow hook makers, who were also needle makers, were dispersed from their shops near Old London Bridge by the Plague and the Great Fire of London in 1666, and they ultimately established factories in Red ditch around 1730.
Rods were also improved as heavy native woods were superseded by straight-grained, tough, elastic woods, such as lancewood and greenheart from South America and the West Indies, and by bamboo. By the end of the 18th century a technique had been developed in which several strips of bamboo were glued together, retaining the strength and pliancy of the cane but greatly reducing the thickness. Between 1865 and 1870 complete hexagonal rods, made by laminating six triangular strips of bamboo, were produced on both sides of the Atlantic.
From 1880 tackle design evolved rapidly. Horsehair for the fishing line was replaced by silk covered with coats of oxidized linseed oil. Such lines were easily cast and sank heavily if ungreased, or floated if greased. The average angler could cast three times farther with these lines, and such methods as dry-fly and wet-fly fishing became possible. In the Nottingham reel, ebonite (a hard rubber) or metal replaced wood, so that it became even more free-spinning. Since the reel revolved faster than the line runoff, a considerable tangle (called an overrun in Britain, a backlash in the U.S.) could result. Governors were devised to prevent this.
In 1896 William Shakespeare, of Kalamazoo, Mich., devised the level-wind, which automatically spread the line evenly as it was wound on the reel. In 1880 the firm of Moloch, in Scotland, introduced the first turntable reel, which had one side of the spool open. During casting, the reel was turned 90°, bringing it in line with rod guides, so that the line slipped easily off the end of the spool. For line recovery, the spool was turned back 90°. The reel was used mainly for casting heavy lures for salmon fishing, but it influenced the reel invented by the English textile magnate Holden Illingworth, which the British called a fixed-spool reel and the Americans a spinning reel. In this kind of reel, the spool permanently faces up the rod and the line peels off in the cast as with the Moloch reel.
In the 20th century, rods became shorter and lighter without sacrificing strength. Split bamboo was largely replaced by fiber glass and finally by carbon fiber as rod material. After the 1930s the fixed-spool reel was taken up in Europe and, after World War II, in North America and the rest of the world, creating a boom in spin casting. Nylon monofilament line was developed in the late 1930s and became dominant after World War II, as did braided lines and other synthetic materials. Plastic coverings for fly lines allowed them to float or sink without greasing. Plastic also became the dominant material for artificial casting lures.
Back to top

Now while modern technologies have now made it possible to "grow" poles much longer, manufacturers were making 16 meters, 16.5 meters and up to 21 meters poles before CIPS (International Sport Fishing Association) decided to stop the 'race', limiting pole lengths at all its matches to 13 meters.
Today fishing has become extremely popular and it is in fifth place after such entertainment events as socker, volleyball, basketball, football and hockey. The popularity of pole fishing has grown immensely in the last few years. Much of the credit for this must be given to the tackle manufacturers who continue to produce cheaper, lighter, stronger poles each season.
Today pole fishing is much more than just fishing; it is relaxing and pure pleasure and also escapes from the stress from everyday life, also it's an exciting, competitive challenging sport that gets the heart beating and adrenalin flowing. Why people like to catch bigger fish? They fight harder. Why people tend to use the lightest equipment possible? To accentuate the fight, to make it the most entertaining and exciting fight it can give you. What could be more entertaining than fighting a really big one with the lightest tackle and finally winning the fight? Your pole rod is bending, the line is gaining, and the fish is flipping and flopping, pulling and running, jumping and swirling. You need good skills, a little luck and a great rod to win that fight, to get as much fun and as many victories as possible. More great emotions - longer and healthier is your life.
Back to top